New Britain, Conn., March 13, 2018 – Hospital for Special Care President and Chief Executive Officer Lynn Ricci is the new board chair of the Community Foundation of Greater New Britain (CFGNB) and will serve in that capacity for the next two years in succession of retired Hospital of Central Connecticut President and CEO Laurence Tanner. 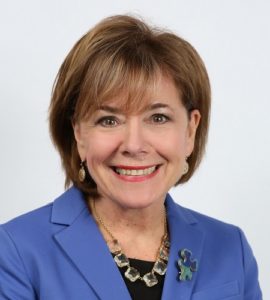 Ricci’s election comes following her service for the past two years as the Foundation’s vice chair.  Succeeding Ricci as vice chair is Plainville attorney Paul Zagorsky, while joining the board for the first time is Kensington’s Ed Kindelan.

Ricci, who joined the CFGNB board in 2014, looks forward to her leadership role with one of the nation’s oldest community foundations.

“The Community Foundation of Greater New Britain plays a vital role not only providing financial support of community causes and organizations serving Berlin, New Britain, Plainville and Southington, but also as a leader in helping our communities shape their futures,” Ricci said. “I look forward to working with my fellow board members and CFGNB staff to continue making a difference in the communities we serve.”

Ricci, who also serves as chair of CFGNB’s Executive Committee as well as on its Governance Committee, joined the Hospital for Special Care (HSC) in 2007. She holds bachelor’s, master’s and sixth-year degrees in psychology and served 20 years as a licensed long-term healthcare administrator. Ricci became a fellow in the American College of Healthcare Executives in 2015. She is a past Rotarian, an executive board member of the New Britain Academy for Health Professions, and a board member of the Connecticut Alliance for Long Term Care, CCARC and the Middlesex County Chamber of Commerce. Last year, Ricci was named one of the Hartford Business Journal’s “Five to Watch,” and is a past recipient of the HBJ’s Women in Business Award.

Zagorsky, who joined the Foundation board in 2012 and is now in line to succeed Ricci as board chair in 2020, is a partner in the Plainville law firm of Zagorsky, Zagorsky & Galske, P.C. He is active in the community and a co-founder of New Britain’s Hoops for the Homeless charity event.

Kindelan is a CPA and Regional Managing Partner of CohnReznick, LLP in Hartford. He serves or has served on the boards of the New Britain-Berlin YMCA; Hartford Area Habitat for Humanity; CW Resources; American Heart Association, Connecticut/Western Massachusetts and more.

Cifone is the principal of Body Works, LLC in Unionville. She has extensive non-profit experience in the Greater New Britain community, having served as co-executive director of the YWCA of New Britain, as a fundraising consultant for the Hospital of Central Connecticut, and as foundation manager/major gifts officer for the Foundation for Special Care.

Established in 1941, the Community Foundation of Greater New Britain is “Where Good Begins” in Berlin, New Britain, Plainville and Southington. The Foundation works to inspire philanthropy, manage permanent charitable assets effectively, and partner to address key community issues through strategic leadership. Since 1919, the Community Chest of New Britain and Berlin has been a fundamental part of our community, supporting programs and organizations that meet vital health and human service needs. Both organizations are located in The Foundation Center at 74 Vine Street in New Britain. For more information, visit www.cfgnb.org or www.ccnbb.org.