New Britain, Conn., March 1, 2020 – The Community Foundation of Greater New Britain (CFGNB) has awarded three Champion Awards for 2020. The CFGNB established their Champion Awards in order to celebrate and recognize individuals, businesses, organizations, civic groups, and others who have supported the activities of the Foundation in a manner that allowed it to fulfill its mission even more effectively and efficiently.

This year, the Foundation has named Andrea Tarantino and Napcon Communications of Southington, Five Churches Brewing of New Britain, and Jason Howey and OKAY Industries of New Britain as their Champions. 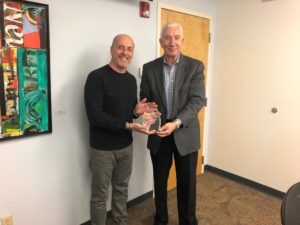 Napcon Communications of Southington specializes in the design of custom websites and supports numerous local nonprofit organizations with discounted services in order to give back to the community. Andrea Tarantino, Founder and CEO of Napcon Communications, has been consistent and reliable over many years with his exceptional technical support of the Foundation’s websites for CFGNB and their supporting organization, the Community Chest of New Britain and Berlin (CCNBB). 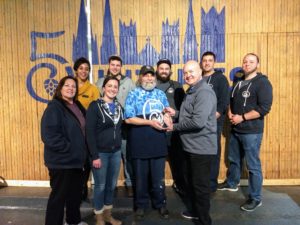 Five Churches Brewing of New Britain hosted the CFGNB’s Giving Brewsday event in 2019 and generously gifted their space, time, and energy to make it the most successful Brewsday yet. Five Churches Sales and Marketing Coordinator, Christina Caccioppoli, is a member of the Buzz, Greater New Britain’s Young Professional Network, and supports the Young Philanthropy Initiative at the CFGNB. The Brewery also went above and beyond in their support by donating a portion of the drink proceeds from Giving Brewsday back to the Foundation’s Civic Leadership Fund. 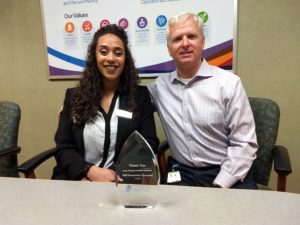 Kaylah Smith of CFGNB and Jason Howey of OKAY Industries

OKAY Industries has been a long-time and generous supporter of the Foundation’s Civic Leadership Fund. In 2019, Jason Howey, President & CEO of OKAY Industries, took leadership in establishing and leading the effort for the New Britain Manufacturing Academy Fund at the CFGNB. The fund was established to raise the financial means to meet the mission of the New Britain High School Manufacturing, Engineering, and Technology (MET) Academy; to create the best in-class manufacturing academy at NBHS that develops a skilled talent pipeline to support the current and future workforce needs in New Britain and the surrounding area through pre-apprentice and apprenticeship programs. OKAY Industries pledged $30,000 to the fund to ensure the students of New Britain have the skills they need to enter the workforce.

Previous Champion Award recipients include Stanley Black & Decker of New Britain and Witch Doctor Brewing of Southington for their incredible support of the Foundation and its programs and events.

To learn more about the Champion Awards and to see a list of previous recipients, click here.