How ‘bout them apples?

Locals packed the gallery at Southington Community Cultural Arts on the eve of the Apple Harvest Festival for an official reveal of 40 uniquely customized apple statues.

SoCCA’s Apples & Arts project kicked off back in March when executive director Mary DeCroce finally started bringing her vision to life—something she had been brewing in her head since 2008. The project connected sponsors to artists, who then worked together to create a visual. All proceeds from the project will benefit SoCCA’s All Access program, the United Way of Southington, Bread for Life, and Southington Community Services. 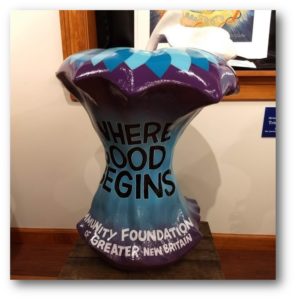 “I am so thrilled to see these completed and beautifully done apples tonight,” said DeCroce. “I just keep thinking about how about two and a half months ago all the artists had tables lined up in here with their ideas, and now the completed apples have taken their places. It all came together wonderfully.”

Artists presented their masterpieces and shared the story behind its design to anyone interested. Once the sponsor selected its artist back two and a half months ago, they had the option to choose one of the artist’s designs, or work with the artist to create a specific visual.

“I couldn’t be happier with how it came out,” said David Obedzinski, president of the Community Foundation of Greater New Britain, a nonprofit organization which aids Southington, New Britain, Plainville and Berlin. “It’s got our colors, our slogan of ‘Where Good Begins,’ and really captures the spirit of who we are.”

Obedzinski said CFGNB was excited to be involved in the AHF parade for the first time. The apple will be on the Chamber of Commerce’s float. 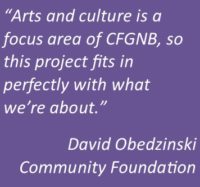 “Arts and culture is a focus area of CFGNB, so this project fits in perfectly with what we’re about,” he said.

The paint looked wet on the apple atop Explicit Airbrush’s float. The company sponsored the apple and donated the topcoat for all 40 apples. (Photo by Janelle Morelli)

Mike Berlinski, a Southington resident and artist of two of the apples, designed one apple to depict Southington’s town green (sponsored by the Calvanese Foundation), and a second to showcase the Zion Lutheran Church.

“The project came with some challenges, but it was worth it in the end,” said Berlinski. He added both organizations were great to work with.

One artist, Barbara LaButis, was in a search for art classes online when she found SoCCA’s website, along with information about the project. 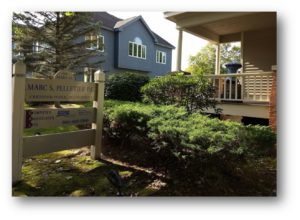 “I saw it as an opportunity, and I wanted to be a part of it,” she said. She, too, designed two apples—one full apple, and one apple core. The full apple featured bushels of beautiful hydrangea flowers. The apple core, sponsored by Serafino’s Pharmacy, featured all three of the business owner’s black Labradors.

“I loved both of these projects in different ways,” she said. “There were definitely some challenges, but I just kept focus on what I wanted to achieve.”

Now that the apples are complete, they will be featured in several upcoming events and activities. After being marched through the parade, the sponsors will take the apples to a location of their choosing. A scavenger hunt will ensue. Maps will be designed and available for locals to pick up (locations not determined yet). For those who find all 40 and submit their completed maps, they will be entered into a raffle.

Then, 40 small, wooden apples will be hidden around town. Find just one and win a prize at the Calvanese Ball on April 6, 2019. At that time, the apples will be either purchased by their sponsors, or auctioned off at the ball.