New Britain, Conn., May 16, 2018 – For more than 75 years, the Community Foundation of Greater New Britain has known that to fulfill its role as a community leader, partner and funder of vital programs and services in Berlin, New Britain, Plainville and Southington, it needs a strong base of support in the way of engaged donors, partners and supporters.

Thanks to a variety of well-received new initiatives, the Foundation is making major inroads in boosting community engagement and support, inroads that bode well for the Foundation’s future.

“It’s all about relevancy, relatability and accessibility,” says Community Foundation of Greater New Britain President David Obedzinski. “The Community Foundation is in a very good place right now. We are seeing great success, through these new initiatives, in communicating our mission to a wider, more diverse audience and in so doing, making local philanthropy more accessible to more people than ever.”

Most of this success can be attributed, said Obedzinski, to a revitalized Catalyst Fund, a grass roots philanthropy initiative that is attracting significant numbers of new members, and the Foundation’s Young Philanthropy Initiative, which kicked off last fall and is aimed at engaging young professionals in the work of the Foundation. In addition, the Foundation’s 2018 Capacity Building Initiative – including its new Non-Profit Resource Center and Lending Library at the Foundation’s offices at 74A Vine Street, New Britain – is elevating the role the Foundation plays as a resource and partner for local non-profits as they face every-day challenges. 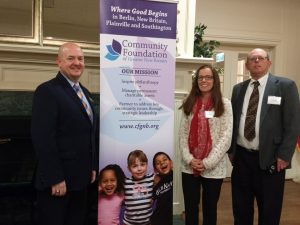 Catalyst Fund: The Catalyst Fund will kick off its 2018 season June 7 at the Hospital of Central Connecticut with more members than it has seen in years, thanks to a concerted effort to make the program more accessible for more people and local businesses. The Fund – which offers individuals, families and businesses a hands-on opportunity to learn about challenges facing the community and to play an active part in making a significant year-end grant to address such challenges – had 35 members in 2017. So far in 2018, a new membership drive has produced 24 new members; with anticipated renewals of existing members it is expected that 2018 membership will top 60.

“What is happening with the Catalyst Fund is truly exciting,” said Director of Community Initiatives and Program Services Joeline Wruck. “There has been a groundswell of new interest and this new vitality is proving that people truly are seeking ways to make a difference in their communities.” 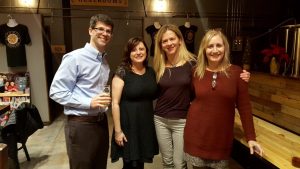 Young Philanthropy Initiative: The Community Foundation is working hard to engage young adults in its work and the business of philanthropy, and its efforts are paying off. The Foundation put its own spin on Giving Tuesday last November 28 with a “Giving Brewsday” event at Alvarium Beer Company in New Britain to kick off its new Young Philanthropy Initiative. More than 100 attended the highly successful event, learning about the work of the Foundation and volunteer opportunities with local non-profit agencies and partners. The event was so successful that a follow-up event is planned for this July, this time at Witchdoctor Brewing Company in Southington.

The event’s date and specifics will be announced soon. To learn more about the Foundation’s Young Philanthropy Initiative, contact Kaylah Smith at ksmith@cfgnb.org or 860-229-6018, ext. 305.

Capacity Building Workshops and Non-Profit Resource Center and Lending Library: In January, the Community Foundation and American Savings Foundation announced a partnership to offer a series of in-depth capacity building workshops for local non-profit organizations, designed to help organizations address the increasingly difficult challenge of sustaining programs and services during lean fiscal times. The response was overwhelming, so much so that the original plan to offer six workshops over the course of the year was expanded and customized so that more organizations could receive the training they needed. 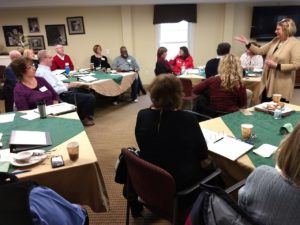 More than 30 local non-profits serving Berlin, New Britain, Plainville or Southington are in the midst of the workshop series which kicked off March 21 and will continue into October. Among them are the Early Childhood Collaborative of Southington, the New Britain Symphony, the Berlin Land Trust, the Plainville Community Food Pantry and many more. Among the topics covered by the workshops are strategic planning, fundraising, marketing, board development and more.

“The response to this series has been very enthusiastic and is a validation that this kind of training and insight represents what non-profits want and need to continue to do the good work they do,” said Wruck. “This series captures the added value the Foundation provides every day as a community partner, and we could not do it without the support of the American Savings Foundation, as well as Stanley Black & Decker and the Hospital for Special Care, which are sharing the role of host for these workshops.”

Another component of the Capacity Building Initiative is the launch of the Foundation’s Non-Profit Resource Center and Lending Library, housed within the Foundation’s offices at 74A Vine Street, New Britain and made possible in part by a grant from the Farmington Bank Community Foundation. The Resource Center is designed to provide non-profit organizations access to useful and relevant resources they might not otherwise have or can afford. The resources are both on-line and in hard copy, and include on-line philanthropy and non-profit management subscription services, how-to basics and reference materials, professional publications, town and local directories and much more.

The Resource Center is open for use by local non-profits Monday through Friday, 8:30 a.m. – 5 p.m. Books and materials are available for a complimentary 30-day loan, while on-line resources may be used in the Foundation offices by appointment. For more information, contact Joeline Wruck at jwruck@cfgnb.org or 860-229-6018, ext. 307.