Skip to content
A Buzzworthy Cause July 17 at Witchdoctor Brewing

New Britain, Conn., June 21, 2018 – Following up on its initial, successful foray last fall into engaging local, young professionals in philanthropy and community service, the Community Foundation of Greater New Britain is planning its second “Young Philanthropy” networking event, “A Buzzworthy Cause,” on Tuesday, July 17, from 5-9 p.m. at Witchdoctor Brewing Company in Southington. 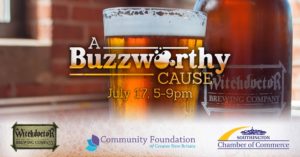 The event, sponsored in part by the Southington Chamber of Commerce and Witchdoctor Brewing, is designed to bring together young professionals who live and work in the Greater New Britain region in a festive, convivial atmosphere to network and learn about their communities, the non-profit organizations which serve them and opportunities to make a difference.

“Playing an active role in what makes our communities strong and vibrant are important aspects of life for today’s young professionals, and the Community Foundation wants to do all it can to facilitate this strong interest in giving back,” said Community Foundation Program Associate and Assistant Director of Development Kaylah Smith, who leads the organization’s Young Philanthropy outreach efforts. “A lot of buzz is being generated locally by active, engaged members of our community and we’re proud to be part of it.” 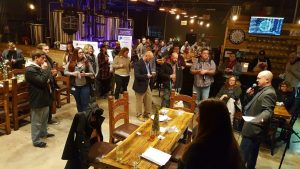 The Foundation’s Young Philanthropy Initiative kicked of last fall with “Giving Brewsday,” a November 28 Giving Tuesday event at Alvarium Beer Company in New Britain. More than 100 gathered to network and learn about the work of the Community Foundation and other non-profits. In addition to the community connections that were made, the Foundation received more than $500 in donations to its Civic Leadership and Hurricane Maria Puerto Rico Relief Funds.

Since that first successful effort, the Foundation has continued to maximize and become involved in opportunities to engage young professionals:

“A Buzzworthy Cause” at Witchdoctor Brewing will focus on non-profits serving the Southington community, with several in attendance to talk about their work. The event is free to attend for those age 21-plus, with each attendee receiving a free beverage. The event will feature food, music and prizes, and young professionals are encouraged to come in groups.

Those interested in attending are encouraged to visit the “A Buzzworthy Cause” event page on Facebook. For more information or to learn more about the Foundation’s Young Philanthropy Initiative, contact Kaylah Smith at ksmith@cfgnb.org or 860-229-6018, ext. 305.